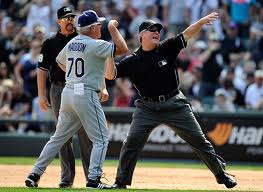 Here's a first for me: a curler was ejected from a game. I've covered curling for more than 30 years now and can't ever remember of a player being punted from the contest. But that's what happened in the Saskatchewan men's playdowns when Chris Schille, second for Brock Virtue, was thrown out of the game.

Don Landry over at the Eh Game, had the details of Schille's expulsion:

Chris Schille, second on Brock Virtue's team, was tossed during the B Event final on Saturday morning, as Virtue battled Josh Heidt's foursome for a spot in tonight's 1 vs 2 playoff game.
Schille was apparently given the heave ho by an official during the second end, when he admittedly kicked a rock into the corner of a sheet.

Schille took to Twitter to give his side of the story, with some strong Tweets.

No point in lying about what happened is it was on TV for all to see. I kicked I rock into the corner after a 'made' double by Brock....
— Chris Schille (@cschille) February 2, 2013


Apparently the lovely lady never competed in her sad life official saw it differently. Instead of talking it over I was given 15 seconds ...
— Chris Schille (@cschille) February 2, 2013


To leave the ice or we forfeit the game, then given 5 more minutes to change and leave the building before being 'physically removed' ....
— Chris Schille (@cschille) February 2, 2013


This is clearly all very acceptable and I should probably also be thrown in jail, maximum security at that. 25 to life sounds fair.
— Chris Schille (@cschille) February 2, 2013

If all Schille did was boot a rock into a corner, then the official is the one who should be tossed. This happens in just about every big game and I imagine a player such as Wayne Middaugh would lead the World Curling Tour in ejections if this was an infraction.

While we don't know all of the story, let's be real here. It wasn't as if Schille went into the crowd  and started beating on the fans. He apparently just kicked a rock into the corner a little too forcefully for the official. Perhaps some words were exchanged. The question is does the penalty fit the crime?

I'm all for broom slams and even broom breaking or shirt ripping, such as John Morris did back in the day. I don't mind when a curler thumps the end of his broom down on the backboards either. I think it's better to see a little emotion from players, to display some passion for what's going on than being Melba Toast bland. Certainly there are limits, but let's get real here. This isn't the Friday Night Mixed League we're talking about -- it's some of the best players in the game fighting to get to the Brier.

Again, there are two sides to every story but so far, we haven't heard from the umpire or the Saskatchewan curling officials in any official way. That should come out as soon as possible so this doesn't spin out of control any more than it already has.
There was a time when officials became far too much a part of the story in curling. That was when they sat at the hog line and pulled rocks off. Replays often showed them to be wrong, sometimes horribly wrong. It's fair to say that one hog line official cost Paul Savage a very good chance at a Purple Heart.
Thankfully, the Eye on the Hog took that all away and now officials are there to enforce the rules of the game as written.

But the Rules of Curling do give an official the power to toss someone from a game. Here's what it says in the good book.

"The Chief Umpire may expel a player or a coach from the game or competition area for what they consider to be abusive or unacceptable behaviour including refusal to comply with the rules and direction provided by an umpire."

I'm with Schille in that far too often people who work as umpires haven't been competitive players and therefore don't understand what goes on in a game from a player's standpoint. It's why some of the best umpires of the past were people such as Keith Reilly, a Brier winner, who had been in the player's position before. (You can say the same thing about the people who score games, but I digress).

The fact that this has blown up in the curling community shows just how rare and unusual it is. Hopefully it continues to be that way.