The End of the OCR 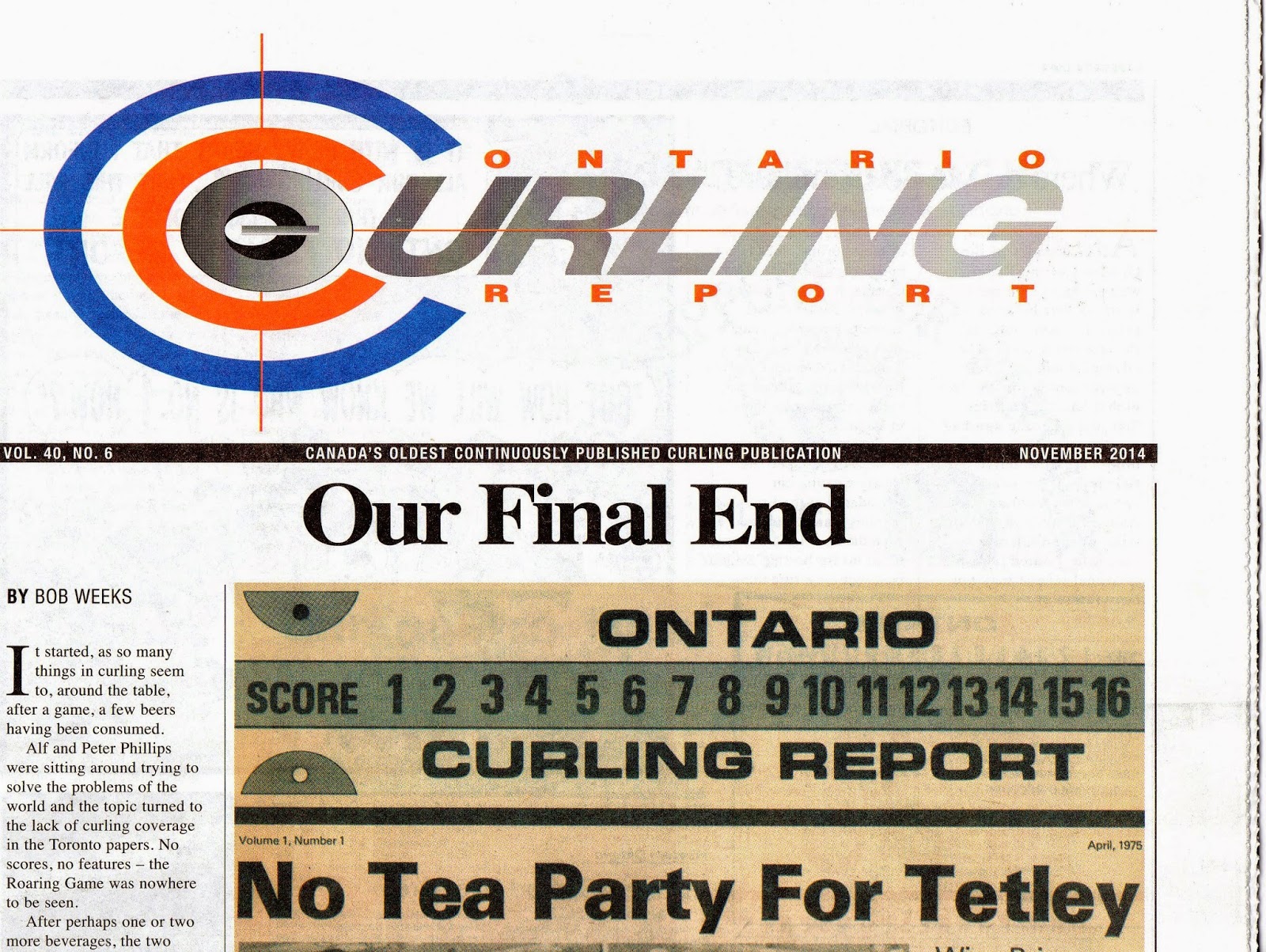 If you've been a curler in Ontario over the last four decades, you probably know the Ontario Curling Report. At least, I hope you do. It's been a staple at clubs since the '70s.

But this month, we printed our last edition. The OCR is hanging it up its broom and throwing its last rock.

I've been lucky enough to be the editor of that paper for the last two decades and have thoroughly enjoyed it. We accomplished a lot over the years, and were integral to getting Labatt's to return to the Purple Heart, to getting the Free-Guard zone implemented and to punting a number of officials who simply had to go. Last year, we finally got answers to the "member not in good standing" debacle the CCA put the OCA into and helped change the course of the OCA's leadership. I don't want to take full credit for all of these things; just that we helped move the needle and provided much-needed information.

We didn't always make friends with people in high places and I'm told that is still the case with at least one high-ranking mandarin, but we were always happier to serve the curlers first. I think if there's one thing I'm proud of with the OCR it's that we served the curlers above all else.

We also had a lot of fun over the years with the regular Top 10 lists and the Behind The Glass rumours section. Frank McCourt's cartoons had a home with us too. He is an amazing cartoonist with a slightly twisted mind!

So why did we end it? The simple reason is money. There simply isn't the financial support for a curling newspaper any more as the world turns digital. People get their news now from places like curlingzone.com and can read scores and results via Twitter, often directly from the players themselves.

The other reason is that it's been a long run, the four publishers -- myself, Alf Phillips, Peter Birchard and Ken Thompson, along with sales guru Paul Savage -- are all getting up there and perhaps have lost a little of our enthusiasm.

But we didn't want to close up shop without one final issue, which is out now. It's been a great run but the time to say goodbye was right.
Posted by BW at 9:31 AM No comments:

I love reading Nolan Thiessen's columns on the Grand Slam of Curling web site. He's a thoughtful writer who has some good ideas about the game.

His latest column is on the creation of the Grand Slam of Curling and how many of they players sliding boulders in the big events don't really have a clue about where or how the series started. You can read his column here.

One thing that Thiessen doesn't mention is the importance of one guy who really was the force behind putting the Series together -- Kevin Albrecht. In my opinion, the Grand Slam wouldn't exist if it wasn't for Albrecht (later, he almost killed it off but we'll get to that shortly).

Albrecht, whom I knew from his work on the golf side of the business where he was Mike Weir's agent, had been working with some curlers and teams trying to get them sponsorship deals and was having little luck. The reason, of course, was that at the highest-profile event-- the Brier -- the players couldn't wear any sponsor cresting. Most of the other events had little TV time so trying to get any value for the sponsor was tough.

Albrecht lobbied the CCA, along with help from a number of the curlers, but without any luck. The governing body was rock solid in its stand and wasn't about to change.

I thought that the entire thing would  die a slow death. But then I got a call one morning asking if I could come to the IMG offices in Toronto for a meeting. Albrecht wouldn't tell me what it was all about, just come he said.

When I got there, I sat down with him and Kevin Martin. Something was up, I surmised.

That's when they gave me the scoop on the Grand Slam and how the players were going to play in their own events rather than the Brier and the playdowns leading up to them. Albrecht and his team had created four stops, got sponsorship money and was about to unveil it all. He allowed me to break the news in the Globe and Mail.

I remember getting all the details down and then trying to contact Dave Parkes to get the CCA's reaction. He didn't return calls and I later learned his first knowledge of the Grand Slam was while he was sitting on a plane going to Winnipeg. He saw the story that was on the front page of the sports section and apparently went into a slow burn.

The rest, as they say is history. But while Thiessen's column is right that the 18 teams deserve a lot of credit, so too does Kevin Albrecht and IMG for making the Grand Slam a business.

Of course a few years back, Albrecht left IMG, took the Grand Slam rights with him and slowly got into financial trouble. He didn't pay CBC to broadcast the events and it finally stopped. The Slam went to Rogers Sportsnet where it is today.

One interesting point in all this is that it was always referred to as a boycott. But really it was a choice. The players just chose their events rather than the CCA. That's not really a boycott in my books.

At the end of the day, what happened in that situation paved the way for big changes in the game -- prize money (although it's not really called that) at the Brier, more focus on the players and the creation of the Canada Cup.

Although Albrecht walked away from the sport in disgrace, he was vital in advancing it to where it is now.
Posted by BW at 2:19 PM No comments:

Snaps of your Sleeps for Sandra

So what do curlers do when they retire from competitive play?

If you're Sasha Carter, you get involved in raising funds for the Sandra Schmirler Foundation. Carter is leading a fun campaign called Sweep To Sleep.

It's really quite simple. And loads of fun. All you have to do is take a picture that shows how you and/or your team sleeps. You can have fun with it, make it innovative, creative and even a little bit crazy.

From there, post the picture on Twitter or Facebook with the hashtag #sandraschmirler -- and then go to sandraschmirler.org and make a donation. You can also challenge other teams to get involved! Call them out and make them take their picture.


Get your family and friends to donate and indicate your team's name on the donation page. The team that raises the most money, will have their funds matched by the foundation and will be provided the opportunity to personally present to a NICU of their choice.

Plus every team that donates will be entered in a draw to win a "Bobblehead" for each member of the rink.

The Masters of Curling finished up last week with some good games and even a pretty dramatic shot by runner-up Mike McEwen (if you missed it go here and watch).

The men's final drew 307,000 viewers while the women's final wasn't quite as popular, bringing in 264,000. Both finals took place on Sunday.

That means it's in a class that's less than CFL but above soccer, including the game between Man U and Man City, which had 264,000 sets of eyeballs.

These are decent numbers for curling and I'm sure Sportsnet is happy with them. Anything on a Sunday before Christmas will always have to go up against NFL which saps the audience potential. There was also Skate Canada (Ice Dance, 487,000) and NASCAR (476,000) to deal with.
Posted by BW at 4:07 PM No comments:

Called and made: Mike McEwen

OK, this shot is crazy-good and so far, my leader (by a wide margin) for shot of the year. Not only was it an amazing shot, I think it was huge just to be able to see that it was there.
It happened in the Pinty's Grand Slam (see how I used the new sponsor's name in there?) final against Brad Gushue. Despite the great shot, it was the boys from The Rock who took home top prize.
Enjoy!