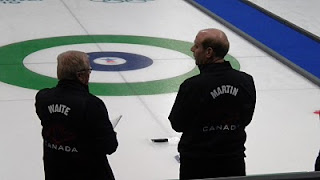 Day 2 at the Olympics:

• I’m not sure who made the draw for this big shootout, but did anyone not notice that Great Britain played its first two games on the same sheet with the same rocks? Even skip David Murdoch was shocked at that. The Canadian women played the same sheet twice in a row but with different rocks.

• Speaking of Murdoch, he was called for a rules violation that I’ve only seen once before. He wasn’t standing on the sheet when the first rock of the second end was thrown. That’s a violation as the person in charge of the house has to be on the sheet. Seems a little picky but it’s in the book. Then again, so is the rule about dumping and that never gets called.

• Is there a sadder story so far than the American teams here? And I don’t mean sad as in pathetic but as in you feel bad for them. Combined, the men’s and women’s rinks are 0-5 and they shouldn’t be. These guys and gals just find a way to lose when they seem to be in a position to win. Last night, John Shuster had a draw to the four to win his game but the sweepers missed the call and they ended up losing on a measure. That sent the game to an extra end where the skip missed a raise takeout for the win. To me, it just seems as if these teams are playing much better than their records although sometimes I scratch my head at the strategy. I like Shuster’s Tweet this morning though: “Not one ounce of quit in this team....and that's a promise.”

• By the way, U.S. fifth man Chris Plys, a prolific Tweeter himself, has been told to stop tweeting during the game. Seems they want him to focus on curling rather than Twitter, which sort of makes sense. If I’m not mistaken, he is the first athlete at the Olympics to Tweet during the competition. And likely the last.

• Despite all the promises, I have yet to see another Canadian athlete show up to watch curling .

• Oh and all these whining British writers/columnists who are saying these are the worst Games ever? Not one has shown up here either. I spoke with a couple of British curling media types here who are somewhat PO’ed at that, considering they have two very good medal shots here.

• Oh and those Norwegian curling pants? There’s now a Facebook Group on them that has more than 53,000 members.
O
Posted by BW at 11:42 AM