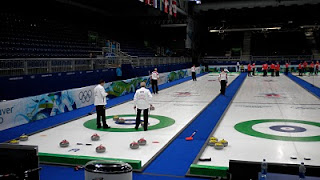 I arrived in Vancouver and spent my first day at the Olympic curling venue, which, in contrast to the rest of the venues, is freezing.

The place, officially called Vancouver Olympic Centre, is sort of tucked in beside a residential area and usually houses a neat little baseball complex.

The curling facility is a good looking, but small complex. There are seats for 5,600 and as for the media, I don’t know if I’ve ever been closer to the action. If Bob Pickering were still playing, he’d probably hit us with his backswing.

This was the first day the players have been on the ice and so far, it’s getting rave reviews. Kevin Martin said there’s about four and a half feet of swing and it’s weight sensitive, meaning if you’re heavy, it won’t move. He also said all the movement is late, good for those quiet weight hits.

I thought David Murdoch had the best line, though, when he said: Finally, the Olympic Games are going to have some curling ice.” There certainly hasn’t been much good ice in the past Games. This should be exciting if it stays like this.

Making a big impression during their session was Team Norway, who showed up wearing pants from a company called Loud Mouth Golf. You might have seen John Daly wearing this line on the PGA Tour. They definitely live up to their name, that’s for sure. 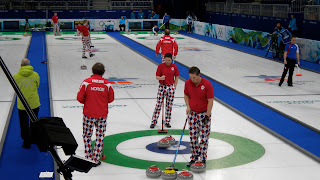 Apparently they have a second set that’s somewhat different. The pants were the idea of second Chris Svae who said there are no rules about what pants you can wear, but he added, “There might be after this.” By the way, he was the guy who brought out the pink belts last year.

Overall my experience here has been fantastic. I woke up early and headed downtown (I’m staying out by the airport) to the main media centre to get my accreditation and was in and out in about three minutes. No waiting. I then took a walk over to the flame and had to admit to being disappointed. The flame and structure are impressive but they’re behind a fence with a generator and some other junk in the way. I’ve posted a picture so you can see what I mean. 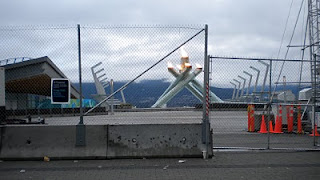 The Sky Train here is amazing and is free so that makes the transportation around the city easy. The curling venue is about a 10 minute walk from the station so as long as it’s not raining . . .as if, right?
Posted by BW at 6:38 PM

Dose the Norway team ride in a clown car?