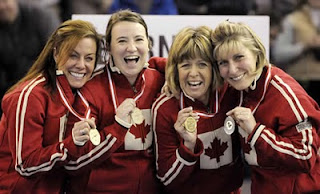 I had a chance to chat with Cheryl Bernard on Saturday as she and her team were in Vancouver for some pre-Games prep. Bernard is a classy individual who gives a great interview, offering up stuff other than the clichés.

When you talk to her, you get the sense she is very focused, very determined and very goal-oriented. So that’s why, she said, it’s been difficult since winning the Trials because her life really hasn’t been her own. She and her teammates have had to put on the leash of the CCA and COC and go here and there and do what they’re asked.

One thing she pointed out as sorely lacking has been the chance to play a competitive event. The squad went to Bern to play in one women’s spiel, but I think if I was the CCA or some bonspiel organizer, four years from now, I’d schedule a big women’s event in Canada in early January. Not only would you likely get the Canadian team, but probably most of the international rinks as well.

I do think it’s wise for the CCA/COC to have put a media attaché in place to help them deal with the crush of requests that invariably comes with being the Canadian curling team. When I did the book with Russ Howard after 2006, he talked about that as being absolutely smothering. Calls came from everywhere and a lot were from U.S. writers who knew basically nothing about curling. He and Brad Gushue had to deal with most of them.

This time out, Karen MacDonald is playing filter. I had no trouble getting some time with Bernard, however. MacDonald was superb in making all the arrangements. George Karrys/Curling Guru in the Sun has a story on the new attaché.

Back to Bernard and her mental fortitude. After talking to her and getting to know her somewhat, I think this is what will carry them through in Vancouver. While they don’t have a lot of international experience, they are so psychologically strong, they might have a big advantage over the rest of the field.