HBO focuses on the Roaring Game 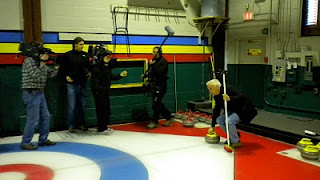 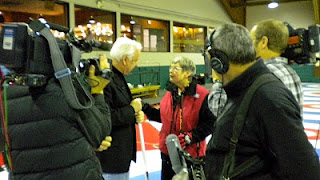 Yesterday, I spent the morning with a crew from HBO in the US who were here filming a segment on curling. We met at Weston G&CC, my home club, and they did a lengthy sit-down interview with me using three cameras (that’s a big shoot!) and then went on the ice for a little instruction followed by some interviews with the Day Ladies curling there.
The reporter was Bernie Goldberg, whom I didn’t know at the time. I Googled him later on and learned he is a seven-time Emmy winner (probably should have done that before and good thing I didn’t bring up politics – his own web site shows he and I aren’t on the same page politically). He was having a lot of fun with the interview, playing the incredulous American who can’t understand how curling can be so popular. It was all in fun and I think the piece will be quite good thanks mostly to his talent.
Like most people, Bernie was mystified about curling and didn’t think it seemed all that tough until we got him on to the ice. He was slipping and sliding and falling but still smiling. He was also amazed when he interviewed a lady who was 87 and still playing front end. (even I was amazed at that.)
Every four years, it seems, there’s a lot of attention on curling from south of the 49th. Most of the time it comes in the form of “you can’t be serious,” or “is this for real?” But at least they’re paying attention.
The crew went on to the Swiss Chalet National to talk with the big shooters and the piece is set to air Feb. 9 on HBO but U.S. only.
Posted by BW at 10:43 AM

Bernie does great work on HBO Real Sports - great journalist but yes his political views are extreme and personally hard to take.

I'd think Bernie (and quite a few Yanks) would find Canadian views a tad bit odd and hard to take. It goes both ways.

perhaps he didn't think it was necessary to declare himself as a republican when he introduced himself.....maybe the fact he didn't bring it up and you are makes him a little more civilized....but then again a typical liberal elitist comment coming from the center of the universe....

Just saw the HBO piece and I feel like I should apologize for Bernie's disrespectful report on curling. I don't know much about curling but I know it deserved better treatment than HBO gave it. Canada, enjoy the olympics; you are doing a great job!