At the Casino Rama Skins 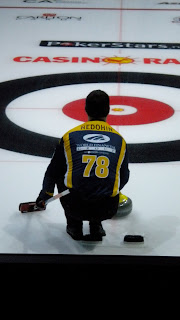 I spent yesterday at the Casino Rama Skins Game for the annual big-momey shoot-out and was once again suitably impressed by the event.

The Skins has been around for more than 20 years in various incarnations but it’s hard to think any have been better than the three that have been held at Rama.

It’s such a unique setting for the curling, building a one-sheet rink for three games inside a room usually reserved for musical or comedy acts.

So, some thoughts on what transpired yesterday.

* In the first game, Glenn Howard’s team outplayed Randy Ferbey’s rink but didn’t come out on top. Howard was mystified as to why his final rock in the seventh end curled so much. That was the shot he had to win all the money that he’d make 98 times in 100. Later on, while talking to Kevin Martin, he said if it had been a regular game, Howard would probably have won in six ends. But in Skins curling (and golf for that matter) the team that plays the best doesn’t always win.

* Speaking of Glenn Howard, he admitted yesterday that the last month has been pretty tough on him and his team. Losing in the final, he said, was about the worst possible thing that could happen. He did say that in the summer, his team talked about the possibility of not winning the Olympic spot and re-tooling for a Brier run, which would be his 12th by the way. He called it Plan B.

* I was very impressed by the Scots, whose experience in Skins was limited to an event in Sweden before Christmas. David Murdoch told me that in that one, they finished third behind Peja Lindholm and Niklas Eiden and just ahead of Anette Norberg (“Barely ahead,” Murdoch quipped). They played exceptionally well, especially in the first five ends.

* Nothing against the Skins, but the format doesn’t seem quite as dramatic as it did in the days before the free-guard zone. In those days, you never saw the double-raise-wick-double-takeout to the button for three. Now you see those at every Grand Slam event. The major difference with the skins is that every end is like the last as no one really worries about giving up a big end as you might in a regular game.

* I sat beside Scottish coach David Hay yesterday during the second game and he told me about the detailed program the team has been going through in preparation for the Olympics. The amount of training put in and resources that have been available to his squads (both men and women) is more than impressive. Here’s a prediction: if the Canadian teams don’t both win gold, there will be a push to move towards selecting the squad for 2014 ahead of time and giving them a full year to train was the Scots do.

* I met up with Randy Paul, and old friend and the TSN executive who is responsible for the business side of the Casino Rama Skins event. He told me there are nine new sponsors involved with the event this year – remarkably impressive in this business environment. This is the end of the first three-year deal between the casino and while Paul wouldn’t say anything formal, I read between the lines that the deal will be extended and an announcement will come soon.

* The players at this event are well looked after. They all get a hefty swag bag that includes a GPS unit, TSN clothing and gift certificates. As well, they are wined and dined and put up courtesy of the Casino. Of course for the winner, it’s pretty much guaranteed to be the biggest payday of the year.
Posted by BW at 11:38 AM