Jacobs' eight (with video) and other eights

Brad Jacobs won his third straight Northern Ontario title in a big way. In the semi-finals against Tim Phillips, Jacobs did the remarkable, scoring an eight-ender en route to a 14-3 win.

Later that evening, he knocked off Mike Jakubo in the final to earn his tickets for the Brier.
Now I’ve curled and covered curling for some 30 years and have never seen a real, live eight-ender. The only other one I can remember in competitive circles was Kelly Scott’s at the 2006 Players Championship.

In the video of the game, you can see how the eight sneaks up a bit on Tim Phillips. If you advance the video below to 3:18, you'll see the last two shots. Phillips actually makes the eight possible by missing his last rock and opening up his lone counter in the rings. Jacobs doesn't miss with his last one and the eight is recorded. 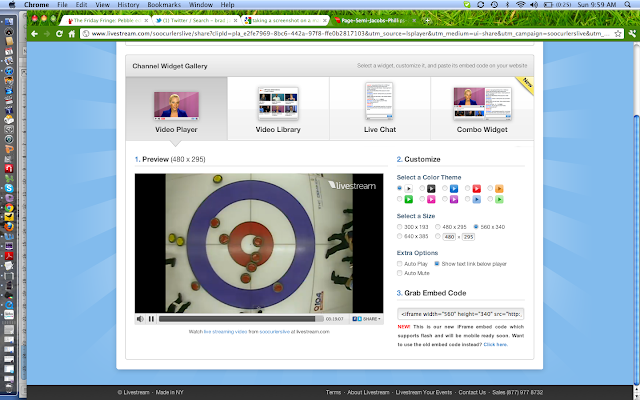 Above is a screen shot of the final eight Jacobs's rocks on the rings.


One of the best near eight-ender stories in the Brier came back in the 1936 edition. While playing against a much weaker PEI team, Ken Watson had a chance to score eight, but while sweeping a stone, an ash from lead Charlie Kerr’s cigar fell onto the ice (yes, he was smoking while sweeping) in front of the stone causing it to stop. The team ended up hanging a seven.

I get asked a lot if the eight-ender is like a hole-in-one in golf and the answer is clearly no. While both require an element of luck, in golf, there’s no one trying to stop your ball from going in the hole. In curling, you not only have to make eight great shots, but hope the other team misses a lot.

On three occasions, as a knee-sliding club player, I’ve had all eight rocks in the house and failed to score. The closest I’ve come to hanging eight actually came in a major league game many years ago against the great Ed Werenich. We had seven rocks in the rings and last rock. The Wrench had his final shot to play and despite the right call being a draw, there was no way he was giving up eight so he threw a hit, and received a chorus of boos from everyone else on the ice. I think we eventually scored five.

The King is dead. Long live the King.

Jeff Stoughton, defending champion of the Tim Hortons Brier, won’t be back this year after getting dusted in the Manitoba playdowns. As PaulWiecek reports, the champs simply weren’t good enough.


"It's disappointing just because we didn't play that well. I think that's the toughest thing to take," said Stoughton. "We didn't play good enough to win and we got what we deserved...

The final will be between Mike McEwen – playing his third straight provincial final – and the winner of the semi between Rob Fowler and Willie Lyburn.

You’d have to give the edge to McEwen who has been just about the best team in the world this year. But then again, no one expected Stoughton to lose either. Still, I really like the McEwen team, how hard it works, how much they love the game and flat-out good they are. If they get through the final, I'd make them my favourites to win the Brier.

In Alberta, it’s looking like a championship will be decided between the two Kevins – Martin and Koe. Martin stayed alive in the Page Playoffs on Saturday and must get past Brock Virtue on Sunday morning to get to the final, where Koe is awaiting the victor.
Al Cameron has the wrap-up.

Glenn Howard will play for his seventh consecutive Ontario championship at The Dominion Tankard in Stratford but he almost dropped into the semi-final.
Howard needed to steal singles in the 10th and 11th ends to hold of Peter Corner. The Toronto Star has a brief recap.