Scotties from my couch 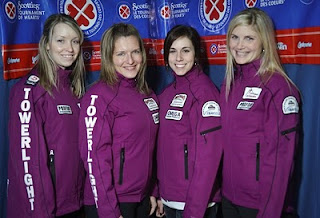 So what’s going on at the Scotties? I don’t recall seeing so many missed shots in a big event. It’s not that the curling is horrible, just that you expect it to be a lot better at this stage.

I heard Vic Rauter talking on the FAN 590 radio in Toronto this morning and he was saying the ice has been giving the players fits, that it seems to change from morning to night. He too mentioned the number of missed shots. He also said that it’s very sensitive so if a player sets the rock back at all, it just never has a chance to get back. Quite often, too, the play gets better as the week goes on and the teams figure things out.

Still, while watching from the comfort of my couch, it’s easy to point out the flaws and point fingers. I’m sure it’s not nearly so easy when you’re there trying to deal with it. Still, I have seen some shaky deliveries with some drifting that almost always means a correction at release. You can get away with that in a club but not so on arena ice.

That’s another thing – the women don’t play as much on arena ice as the men. It’s a much different animal and if you’re an inexperienced team, it can be a tough learning curve. Of course that doesn’t really account for the play of PEI so far which has been the surprise. Of the teams near the top of the leaderboard, I suspect they’ve had the fewest hours on arena surface.

So far, the team that’s impressed me the most has been Ontario’s Krista McCarville. I was duly impressed with her rink in Edmonton at the Trials, with the aggressive style of play she used and the big shots she came up with. It seems to have carried forward – don’t forget she went through the Ontario playdowns undefeated, a remarkable achievement.

Still, it’s a long week and the halfway mark will only be hit today. Let’s see how things unfold today.
Posted by BW at 9:11 AM