Norwegians go without pants in protest

It seems not everyone is in love with The Pants. 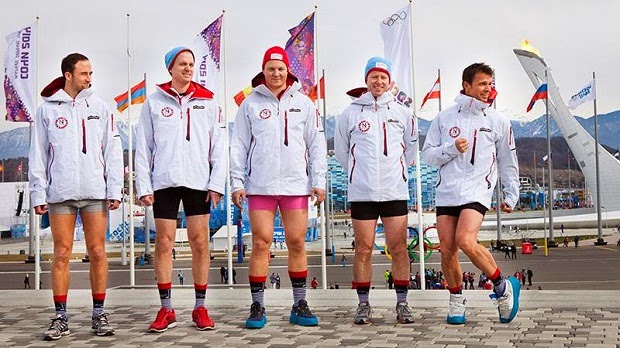 The Norwegian men's team has, of course, become known for their wild pants which debuted in Vancouver four years ago. This Olympics, the squad has brought out an assortment of colourful strides, all with some sort of combination of Norwegian colours.

But apparently not everyone is smiling. There have been some questions raised as to whether the pants are part of the official uniform. And others suggest they might be distracting to the other teams, although none of the other teams have actually been quoted saying that -- most seem to enjoy them.

Are the pants just a fun fashion statement, or does it give the Norwegians an unfair advantage? And are the crazy pants even legal?

International curling rules require "All team members [to] wear identical uniforms and appropriate footwear when accessing the field of play for games or practice sessions" and state that "the colour of these garments shall be registered with the WCF prior to the start of each competition." But, there are no specific details about uniform pants.

UPDATE: The WCF sent me an email that says, I think, that The Pants are OK inside the Ice Cube because the WCF looks after things in there. But when they go out of the curling facility, they fall under IOC rule so they might be in trouble.

And while were at it, if Ulsrud's pants are too loud what about those things the Russians have on? Barf!

In any case, to protest all the official B.S. that might prevent The Pants from continuing, the team decided to get rid of them -- and not replace them. Yup -- the went pantless. In fact, it was a Pantless Protest.
Posted by BW at 9:14 AM