Buy a shirt, help an Olympian

Not long after Russ Howard helped Team Gushue win the gold medal at the Olympics, I had the privilege of helping him write his autobiography. Of course a great deal of it dealt with that run to the gold medal and the madness that ensued from the time the team defeated Jeff Stoughton’s squad at the trials until it stood on the top step of the podium in Torino.

One of the most interesting stories of that trip was in trying to make arrangements to get the families to the Italy. That entailed air fare, accommodation and tickets to the events.

First of all, it was a logistical nightmare and second, decisions had to be made within a few days of winning the trials.

There were other issues too, such as the fact that the Canadian Curling Association not making suitable arrangements for the families, but the biggest issue was cost. Without looking at my notes, I believe it cost Russ something like $26,000 for his wife and two kids to make the journey, start to finish.

That’s very expensive but obviously it was worth it.

So why am I telling you about this? Because Team Jones is going to auction off the jerseys they wore at the Olympic Trials with autographs on them to help defray some of the same expenses for their loved ones to come and watch them go for gold. It would be awful if they weren't able to go simply because they couldn't afford it.

Dawn McEwan’s jersey is up on eBay right now and you can own it outright and help her send some of her family members to Sochi. (I’m going to assume the other jerseys will follow but I don’t know that – anyone?) 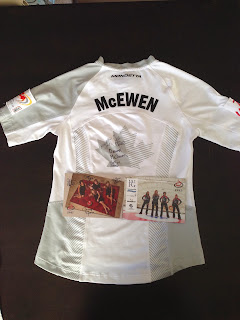 Here’s where you can go to bid on Dawn’s shirt.

As an added bonus, I understand the jerseys have been washed too before they were signed.

So get a rare piece of curling memorabilia and help the Olympicans.