The Science of Curling 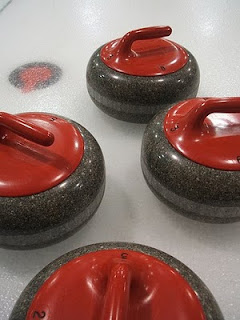 There’s been a lot written and reported about the top-secret-I’d-tell-you-but-I’d-have-to-kill-you research the CCA and COC spearheaded in recent years. Two independent studies were completed, one on sweeping at the University of Western Ontario and one on the delivery at the University of Alberta in Edmonton.

Both studies are said to have produced results that will possibly help the Canadian teams at the Olympics perform better.

I spoke with both Rob Krepps and Dr. Pierre Baudin, a professor of sport biomechanics, about the Alberta study and found it quite interesting. Essentially, the research revolved around trying to determine what factors came into the best release of the rock. So they looked at body position in the hack, foot position, hand position and lots more.

The study utilized motion analysis technology, which is sort of like a three-dimensional person come to life on a computer. A player wears a number of markers on their body and these are picked up by a number of strategically positioned cameras that record the action. Once it’s in the computer, you can change the point of view to see how a person is delivering (i.e. you can look at it from underneath the person if you wanted).

It also used video analysis and the use of lasers as another means of research.

Dr. Baudin said there were some pretty interesting findings and many top players were shocked to learn their alignment was way off when they were in the hack or throwing. But, he said, a lot of the players who may not have the best deliveries, still manage to make the shots. That’s simply a case of them being exceptionally talented.

The study, which I believe received a $100,000 grant from own the podium to complete, was a three-year undertaking and most of the top players in Canada have been part of the testing over the years.

Krepps told me that the results were offered up to the players but it was totally optional whether or not they put the tips into use. Certainly it’s not something that the players were told last week and expected to change in time for Vancouver. As well, Dr. Baudin said the adjustments in almost all cases – if adopted – were pretty minor, but could result in significant improvements.

What’s quite interesting is that both these guys more or less admitted that the Scots either are or were ahead of us in this type of research into curling. I’ve spoken to David Hay about this and he concurred that the Scottish Institute of Sport has been at this type of stuff for quite a while.

Nothing of the Canadian studies will be released any time soon, at least not in the delivery research. The CCA wants to keep it under wraps, even after the Olympics, to try and keep an advantage for future Canadian curlers. And as Dr. Baudin said, it’s really more about a legacy than it is about this Olympics.
Posted by BW at 2:10 PM

Are you kidding me? They spent $100k of taxpayer and CCA membership money and will keep the information secret for years to come?

How ridiculous is this? To work on and use this information someone has to have it years in advance of a major event so they can train, refine and get their bodies used to it.

Will curlers only have access provided they sign NDAs? Or will they only get 6 weeks before the olympics once they're the olympic team?

This Olympic pissing contest is making people do amazingly stupid things just to one up other countries at a sport.

Great blog Bob, please keep it up!
Good plug for the Goldline -- my team's favourite week of the year (or 3 days, at least). You haven't told us how you did at St. George's -- I haven't slept in two weeks :)