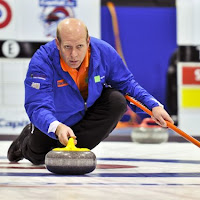 I had a good interview with Kevin Martin yesterday in preparation for my Brier preview for this Saturday’s Globe.
K-Mart was his usual self, full of good comments and observations. I talked to him about how much he’s changed since his first trip to the Brier a way back in 1991 – that, by the way, is almost 20 years ago. Aside from the fact that he has far less hair, he said that when he first got there and on the men’s circuit, he was pretty much a single-talent curler – a good hitter. He realized after playing against Russ Howard, Ed Werenich and Ed Lukowich, to name just a few, that he was going to need touch shots to survive. Don’t forget this is in the era of the old, boring rules.
And, of course, Martin did just that and is now one of the most complete curlers in the history of the game.
We also talked about the rivalry with Glenn Howard. These two, in my mind, are the best two teams in the game and I’ll be surprised if one of them doesn’t end up representing Canada at the Olympics.
From my own selfish, journalistic point of view, it’s not nearly as much fun as the Ferbey-Martin tete-a-tete, but on ice, it doesn’t get much better than these two.
There are lots of tie-ins between the two teams, of course, with Brent Laing and Craig Savill having played with John Morris in the junior days. But as Martin said, the rivalry is all about winning on the ice. He believes the teams are about 50-50 in wins and losses over the years although Howard has had the edge this season (where’s the Black Book when you need it?)
And just as Martin has matured and evolved as a curler, he has also grown savvy in dealing with the media. In the early days, he felt that his side of the story was not always portrayed as accurate and there was a period where I don’t think he viewed the press as anything but the enemy. He used to half-jokingly call me his favourite fiction writer. But he’s much better and clearly more comfortable in talking to the ink-stained wretches although he can be a bit more guarded and careful in what he says, especially in scrums where he might not know all the guys scribbling. In one-on-one situations, such as yesterday, I’ve found him very open and opinionated.
This will be K-Mart’s 10th trip to the Brier and it would be no surprise if he defended his title, much as Jennifer Jones did last week.
Posted by BW at 8:02 AM