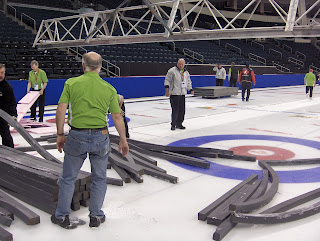 Final Brier thoughts:
* You can read the game story I wrote in the Globe here, but safe to say of the 20 or so Briers I’ve been to, this was one of the worst, even than some of those in the pre-free guard zone days.
Full credit to Kevin and his team for winning. They were the better team on this day, but it was a real slog out there and you have to think that John Morris’s doggy style finish to every throw had something to do with it.
In my humble opinion, with the ice as crucial as it is, a new part of curling etiquette is going to be to treat the sheet just like a putting green in golf. You don’t walk across someone’s line on the green and you shouldn’t leave melt spots on the curling sheet. In fact, if I was the CCA, I’d consider putting something in the rule book about this.
* I was asked to vote for the Hec Gervais award last night, which goes to the all-star in the playoffs. Each voter picked three people and for the first time, none of my picks was a skip. I had Craig Savill first, Marc Kennedy second and then the eventual winner, Johnny Mo. 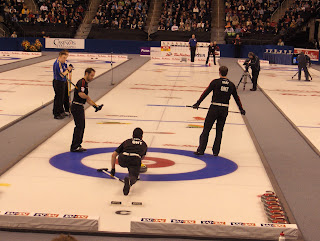 * For the record, I left the Patch at 1:30 on Saturday night and Morris was still there, dancing away the night. (So was his dad for that matter.) In what other sport would that happen?
* Winnipeg put on a good show this week. It was well organized, the Patch was close and the town seemed to have a buzz. Too bad the final didn’t live up to advance billing. Too bad also that more fans didn’t show up, especially for the final between these two (maybe people had a premonition of what was to come). The announced number was 9,223. While 160,000 for the week is still a pretty good number, I know the organizers are a little disappointed.
* Russ Howard got lots of positive comments about his work on TSN. I spoke to several high mucky-mucks in television and curling, and everyone thought he was superb. The only dissenter appeared to be the woman sitting beside Jim “Hollywood” Henderson of Sweep! on the plane home this morning. She thought he was too negative. I’m thinking Russ will likely be around for a while.
* So the CBC didn’t announce the big $1 million shoot out; I heard there may have been some legal issues to sort out still, but I received an e-mail this morning stating that it will indeed still be taking place. I also heard the TSN is well down the road in organizing its own million-dollar draw, this one to take place at the Brier next year. I wonder if the same guy/gal could win both? In any case, there won’t be any shortage of dramatics next year.
* I ran into Jeff Stoughton in the media room yesterday (not sure how a curler got in there, but I digress) and he told me that some time ago he helped out a guy who had one a chance to draw the button for $25,000. The guy wasn’t a curler per se, an so Jeff gave the guy a bunch of pointers and in the end, the fellow got his shot in the four-foot, good enough for $10,000.
*
Posted by BW at 3:13 PM