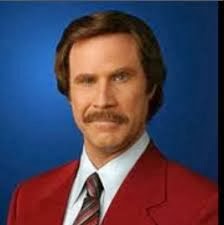 The news has been out for a bit now, but in case you haven't heard, Ron Burgundy is coming to the Roar of the Rings. The famed Channel 4 newsman will join Vic, Russ and Linda in the booth for a game in Winnipeg and also to promote the upcoming Anchorman 2 movie.

Here's the release from TSN on what should be a memorable appearance in the booth.

TSN and the Canadian Curling Association confirmed Sunday that new TSN sportscaster Ron Burgundy will make his Canadian broadcasting debut during the opening day of the Tim Hortons Roar of the Rings on Sunday, Dec. 1 beginning at 2pm et/11am pt. The announcement was made during TSN's broadcast of the 101st Grey Cup.

"Marked by the gods of broadcasting and placed into this shimmering green sphere like a golden egg in hay, chosen like an unclean jackal by Noah himself, I accept your hallowed task and sing out with a battle cry worthy of your love and your wisdom," said Burgundy. "And that song is, 'Winnipeg, get ready to paint the town Burgundy!'"

"It's an honour to work with such an esteemed colleague," said Rauter. "I'm a huge fan of his work. Who are we talking about again?"

One of the biggest events in Canadian curling, Tim Hortons Roar of the Rings determines which team will represent Canada at the Sochi 2014 Winter Olympic Games. TSN has complete coverage of Tim Hortons Roar of the Rings from December 1 through to the finals on December 7 and 8. Ron Burgundy is featured in Paramount Pictures' Anchorman 2: The Legend Continues, opening in theatres everywhere on Dec. 20.


As well, in honour of Ron's Canadian debut, here are the 25 best lines from Anchorman 1: